On the bubble; on the cusp.

Everything upon itself turns
back – cyclonic turning – eventually.

Choose a vortex to place
the pin point and trace
the periphery with the compass;
encompass the perimeter.

Define for you the diameter.

Run your wet finger along
the lip of the wine glass
as you ponder the spiral
reasoning that carried
you back to the top, balancing

on the bubble… on the cusp.

A poem before slumber,
my Love,
upon which to mull;
spicing your dreams.

Proof of love proofed
in words.  Aye, proving
not much – improving
but such as we have been given.

My heart is given
as proof.  Yours, held
in its stead, resides
in my chest.  Mine
your bosom claims
as its worthy bed.

Enough!  Stay my pen!
‘tis enough to carry
dreams delightful,
marry!  May my words
and my love rascal
you through the night
that you wake with smiles
that speak a night’s delight.

Hot stuff,
she’s tuff!
Never leaves
me in the rough.

Spicy one,
she’s fun!
When we part
I come undone.

She’s the seasoning
that brings out the flavor;
in our relationship
she is the savor.

Heaven help me!
She’ll always be
my “Essential ingredient!”

It’s Quadrille night at dVerse Poets Pub.  Say the magic word (the word is “spice,” or some derivative thereof), and you get to post a poem.  Click the link for more coherent instructions. 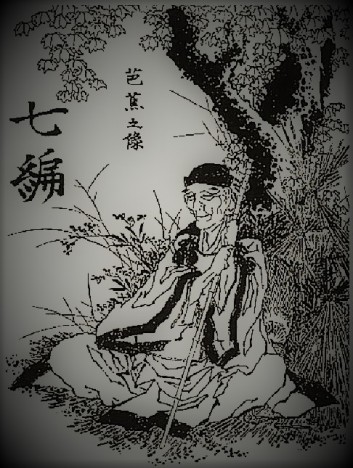 Even a thatched hut
May change with a new owner
Into a doll’s house.

Back in 2012 (or 13?) Chèvrefeuille, the host of Carpe Diem Haiku Kai, introduced the form he called, Troiku.  Follow the link for more information on this form.  It’s an interesting twist on an ancient and revered poetry form.  It’s also a lot of fun!

* — This title has nothing to do with any other “The Doll’s House,” no matter how wonderful… or depressing it may have been.

It was a night like the proverbial,
cliché ones, dark and not stormy,
but dreary, you know, like a Bogart
movie.  He’s the detective waiting
for the entrance of the “classy
dame.”  It’s supposed to be a tale
about a missing sister and a statue.

You know the kind – a woman on
the cover in a tight-fitting blouse
open to here being threatened
by a thug, and there is no story
inside that corresponds with the
image, but who cares?  It’s not
like some forgotten piece of
creepy literature or something.

He sees a shadow through the
frosted glass of the office door,
too small and quick moving to
be a client or a “classy dame,”
so he quietly pulls his piece
from his shoulder holster as
he hears a strange tap on the
wood down by the floor.  He
rubs his chin, thinking it over
before he decides he’s more
than able to handle whatever
life throws at him.  He gets up,
gun in hand and heads for the
door.  Another rap on the door.

“Hold your horses!” he calls.

He grabs the doorknob, aims
towards the floor, and yanks
open the door.  He blasts a
hole in the floorboards the
size of a ’45 slug.  “Son of
a –”  And in flies a bird as
black as the heart of the
woman who broke his heart;
Gracie… or Lenore… something
like that.  As the bird flies out
the open office window he
hears it cackle, “Never noir!”

So, Jilly found this prompt about writing something based on The Raven.  Who wouldn’t like to do something with that great classic.  Perhaps not what I did with it; you know, murdering it.  But, anyway, this is what came out.

I think this has real potential! Real poet-ential.

Digging back a few weeks back into the Poetry Prompt on Poet’s & Writers, I’m going to spend this evening on this prompt:

“Write a poem that takes its cue from an element of Poe’s verse that you are especially drawn toward. Consider its themes of loss and devotion; the extensive use of alliteration and rhyme; the “nevermore” refrain; classical, mythological, and biblical references; the question-and-answer sequencing; the symbolism of the raven; or the forebodingly dark atmosphere.”

Care to join me, my poetic friends?  I’ll be back to post my poem here after I have successfully written it.  Here is a Linky if you feel like joining in!

The sun traversed
the equator (no, it didn’t).

This is how we refer
to (a smaller reality in our terra-centric conceit) it.

The sun remains
in place (unmoved, really).
It is our… (chutzpah?)
misunderstanding.

We do the shifting.

Centuries we believed
we were
the center of living,
the vortex of reality.

We are (delusional)
by scientific evidence
left dumbfounded.

We form culturally-
acceptable redirections,
divert our (addled)
advanced minds from
the shock that comes
from (having to face)
learning we really don’t
matter all that much.

(next we tackle God)

A poem in honor of the start of fall.  You know, when the sun crosses the Equator.

Is it just me?

Is it only me who hears

song cues with this prompt?

Do you ever wonder?

“Each night I ask

“Why do they fall in love?”

Do you stare at the clock?

“How long has this been going on?”

“Does anybody really know…?”

Should you get up and get dressed?

“Where do we go from here?”

Do you check the weather before heading out?

“Have you ever seen the rain?”

Do you know which questions to ask?

Which one is the essential one?

It’s poetics night at dVerse Poets Pub, and we’ve been asked to write a poem that asks.  One that doesn’t answer.  This is my stab at it.  Come join the fun!

It’s hurricane season in Florida.  I know it’s not a universally-accepted season; certainly not celebrated in most Eurasian locales.  It is a deadly reality here.  As I look out at the Oak trees that thinned their canopies in gusts up to 80 miles per hour, I can see more clearly the tiny, indistinct birds, the dragonflies, and the mud-daubers that populate what’s left above the trunks.

Why do I write the way I do?  Damned if I know.  I simply respond to who, what, or where and stuff comes out.  Sometimes it’s crazy, or funny… but I can be deadly serious, as anyone who’s read my works know well.  I’ve been at the beginning of life (my son) and at the end of living (more times than I could ever count).  Everything I’ve done in life (also more than I care to count) gets poured into the mix.  And I respond to great writing.  I pull up a Basho haiku:

But for a woodpecker
tapping at a post, no sound
at all in the house

That’s kind of how it felt at our house after the twelve-hour wind barrage quietened down.  Something like shell-shock followed.

It’s Haibun Night at dVerse Poet’s Pub.  Follow the link to see what’s required, and feel free to join in.

“What are the roofs that clutch, what branches grow
Out of this stony rubbish?” – T.S. Eliot, The Wasteland

Silently,
as is often how dying
occurs, their joy,
their hearts, eroded.

The hand held,
the smile shared,
migrated
south when daylight ebbed
from their conversation.

A grain at a time,
winds of neglect worked
over the once-fertile soil.

Inconstant, hidden tears exposed
them both to the searing
glare of alone.

Years of holding
on produced a change
of landscape –
drastic.

Against
likelihood they stayed
and flourished.

Birds roost
in the boughs reaching
skyward
and sing among new growth. 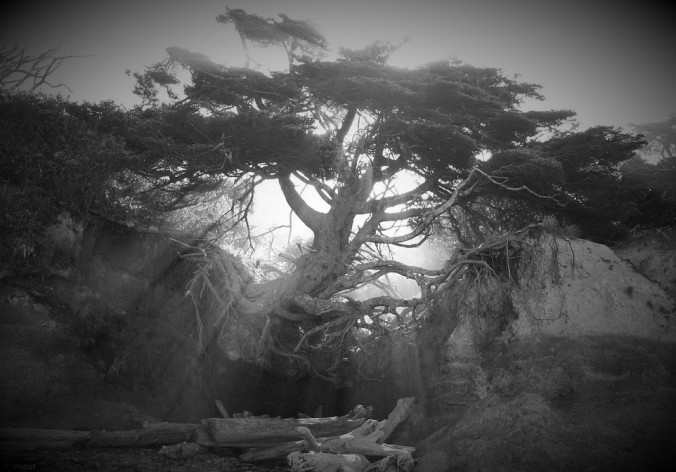